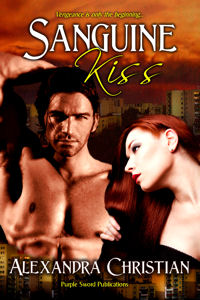 Today I’m turning over the crunchety, chocolatey blogness to somebody else – romantic erotica goddess Alexandra Christian.  Lex’s latest e-book, Sanguine Kiss, comes out today (September 12), and I trapped her in a small room and made her talk to me about it and her writing life in general.

Sanguine Kiss is about a woman, Gillian, who is ditched by her lover in a most unsavory way.  Feeling rejected and replaced, she walks out on a bridge with the intention of jumping.  Before she can do it, she’s confronted by the sexy and arrogant Seth.  He offers her a better way of escaping the bonds of her mortal life.  He’s a vampire, bored with eternity and longing for a companion.  Gillian is all too keen on accepting his gift, but first she has some unfinished business.

LB:  Is this your first vampire story?  What inspired you to write about vampires right now?

This is my first vampire story to be published.  I’ve always been a fan of the genre, both in literature and film.  Vampires are the ultimate sexy anti-hero, but in recent years, like many vampire enthusiasts, I’d become disillusioned with the whole genre.  Twilight, The Vampire Diaries, and other books that are basically “My Big Fat Vampire Wedding” have been essentially de-fanging vampires by not letting them be the brutal predators they are.  It’s disappointing because you’re cutting off your hero’s testicles before the story even begins.  I became determined some years back to write a romance that had a ferocious vampire who likes blood and sex, yet still has a moral compass and isn’t afraid to rip your throat out.  Vampires should be scary, and there are several times in Sanguine Kiss where Seth is not only sexy but damned scary.

LB:  Do you have a favorite vamp from literature or popculture?

There are so many, it’s hard to choose.  Anyone who has ever met me is very much in touch with my love of the cheezy ’80s movie The Lost Boys.  The character of David in that movie is the epitome of the sexy vampire.  He likes girls, he’s fuckin’ scary, and he’s a killer.  He also has this joy about being immortal.  He doesn’t sit around whining about how miserable he is.

LB:  So why are we going to fall madly in lust with your vampire hero?

Seth is, at first glance, the ultimate romance novel hero.  He’s muscular, long dark hair and these incredible piercing eyes.  He commits his first heroic act by page five, but quickly dispenses with the boy scout routine.  He’s beautiful, arrogant, rich beyond our wildest dreams, and has this hyper-intelligence that is at first unnerving.  He has this inherent dominance that lets Gillian know he’s an Alpha from the first time they speak, but it isn’t something that he has to assert.  It’s simply a fact that we just accept.

I try to write every day, though sometimes it doesn’t work out.  My usual place is sitting on the couch with my dog, Murphy, sleeping at my side.  I have to have music in my ears, and I ALWAYS have a playlist to go along with each story.  In fact, any of my readers that subscribe to Spotify can listen to my “Dark Sexy” playlist, and they’ll be listening to the Sanguine Kiss playlist.  My favorite place to write, though, would be a coffeeshop with my writing buddies.  We have a weekly group that goes to our local Starbucks faithfully every Thursday night.  Those nights are usually my most productive times.  I don’t know if it has something to do with the pressure of knowing I have to be out by 10 pm or the unconscious competition with my peers or maybe just the double shot of espresso in the White Chocolate Mocha.

LB:  What are you writing right now?

I have several projects in the works right now.  I have another vampire story coming out this month with Mocha Memoirs Press that’s actually the beginning of a series about a nightclub that’s kind of like a singles’ bar for the paranormal.  I’m working on another series that involves different fetishes. I hope to be able to announce more about that one later this month.  I’ve also got two novels in their early stages:  a pirate adventure with mermaids and a voodoo retelling of the obscure French fairy tale, “The White Cat.”  I’m also collaborating  on a steampunk novel with the amazing Lucy Blue.  I’m really excited about that one!  At any rate, I’m a busy girl these days.

LB:  It all sounds amazing – very best of luck with all of it.  And yeah, you have my sympathy about that co-writer of yours . . . .

So there you go, kittens – new vampy delectable!  I can’t wait to read it.