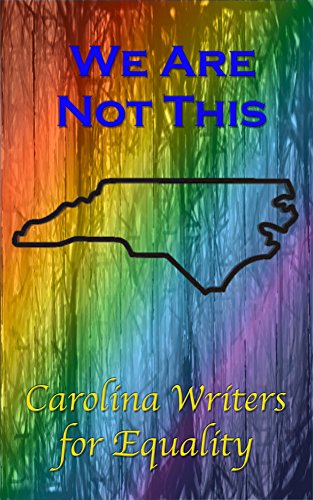 I’m lucky enough to have a story in this–“The Dark Lady” about a transgender actress in the days of Shakespeare. But even if I didn’t, I’d promote the living juice out of it. Much, much great stuff to read, all profits benefiting a magnificent cause. It’s available as an ebook right now from Amazon here, and print copies are on the way. Get a copy, boost the signal, spread the word. HB2 and the hate it represents are NOT North Carolina.

In an “October Surprise” for Governor Pat McCrory and members of the NC General Assembly, Charlotte-based micro-press Falstaff Books today released We Are Not This – Carolina Writers for Equality. The anthology, a collection of 31 short stories, poems, and essays by North Carolina writers or writers who feel a strong tie to the Carolinas, was created as a response to HB2, the divisive “bathroom bill” passed by the NC General Assembly earlier this year.

We Are Not This includes stories from NY Times bestselling author A. J. Hartley, noted singer-songwriter David Childers, Bram Stoker Award nominee Jake Bible, Charlotte Observer columnist and longtime educator Kay McSpadden, Hugo-award nominated editor Edmund Schubert, and a host of other writers. The anthology is currently available as an ebook, and will be available in print within the month.

Proceeds from the sale of the anthology will be divided among NC-centric LGBTQ charities, non-profits, and lobbying organizations. The first group of organizations to receive funding will be Time Out Youth, Queen City Theatre Company, and EqualityNC.

One thought on “We Are Not This: Carolina Writers for Equality – Press Release”