One of the great things about having a network of brilliant author friends is having people to provide brilliant content for your blog. Author and goth culture goddess Emerian Rich is taking over today to give us an excerpt from her new release, Dusk Warriors: 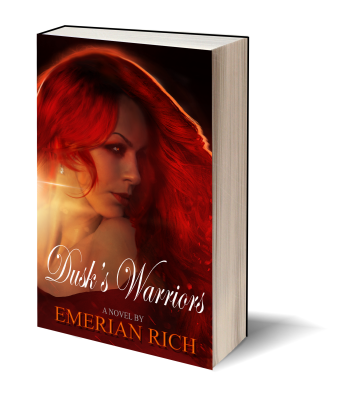 Lucy was kind enough to let me share an excerpt from my new book Dusk’s Warriors. What about a good old vampire hunt?

“Let me buy you a drink for helping me find my way.”

She considered as he read her mind. I got work in the morning and already dealt with one imbecile who thought he could have his way with me.

Julien looked into her eyes. His intent? Making her say yes. She was a tough one. Just like Jespa.

“All right,” she said. “But only if we go to that place.” She pointed across the street to another bar. It wasn’t as dark and the music wasn’t as hard, but Julien could see possibility.

They were the only patrons in the run-down club. Approaching the bar, he placed a crisp bill on the wooden bar top.

“I can’t break a bill that large.” The bar keep wore a faded black concert T and looked like he hadn’t showered in a week.

“Then give us the bottle.”

“Mister, I still can’t break a bill this large.”

“I don’t want change.” The edge in Julien’s voice told the guy not to question him again. Julien took a deep breath before returning to the girl.

She glanced tentatively at the door and then at him as she fidgeted with her boot lace. He’s hot, but all he sees me as is an easy lay.

Or an easy drink. Julien snickered to himself.

Julien hadn’t meant to laugh aloud, but it didn’t matter. He would charm his way through it as he always did.

“You remind me of someone.”

“Someone I loved.” He looked into her eyes, attempting to wield his hypnotic power over her. He put his hand over hers on the table. Despite her strong will, the girl seemed to melt.

The barman brought over a bottle of cheap wine and two chilled glasses.

“We don’t have an ice bucket or anything.”

“It’s fine,” Julien said through clenched teeth, striving to keep the girl’s attention. Her will bent, but the barman’s voice pulled her out of the trance.

“You all right, hon?” the barkeep asked.

The girl looked unsure, blinking as she looked from the keep to Julien.

“Look, friend, I’d like to hear it from her,” the keep said.

“Step away from the table,” Julien said through clenched teeth. He rose, barely able to control his anger.

“Then leave, and you won’t have any.”

The barkeep seemed frozen in his spot.

“Pardon me for a moment,” Julien said to the girl and walked the unwilling barkeep to a store room in the back of the bar.

As soon as the storeroom door closed, Julien’s forearm pressed against the keep’s throat.

“You should learn to mind your own business.”

The keep choked, coughing and panting as Julien pressed on his windpipe. Unable to control his anger or his thirst, Julien sunk his fangs into the keep’s neck before he knew what he was doing. As the blood flowed over his teeth and down his throat, Julien lost all concept of reality. His fangs ripped and tore at the man’s neck, turning him into a worthless corpse. The keep fell to the floor and Julien’s vision cleared.

Heaven has opened up and welcomed the vampires of Night’s Knights into a new reality. As they struggle to find their place in their new world, trouble brews on Earth.

Demon servant, Ridge, is causing havoc by gathering up all the souls on Earth that have been touched by immortality. When he injures one of the Night’s Knights crew, he launches a war between the vampires of Heaven, the Big Bad in Hell, and a mortal street gang of vigilante misfits.

Will Julien, Markham, and Reidar be able to defeat the evil that’s returned, or will they once again need Jespa’s help?

“A world of horror with realistic characters in a fast paced thriller you won’t be able to put down.”

~David Watson, The All Night Library

“Emerian brought the Vampire Novel back from the dead.” ~C. E. Dorsett, Shine Like Thunder

Available now at Amazon.com in print and eBook

Emerian Rich is an artist, horror host, and author of the vampire series, Night’s Knights. She is the hostess of the internationally acclaimed podcast, HorrorAddicts.net. Under the name Emmy Z. Madrigal, she writes the musical romance series, Sweet Dreams and she’s the Editorial Director for the Bay Area magazine, SEARCH. She lives in the San Francisco Bay Area with her husband and son.

One thought on “Dusk Warriors – New Vamps from Emerian Rich!”