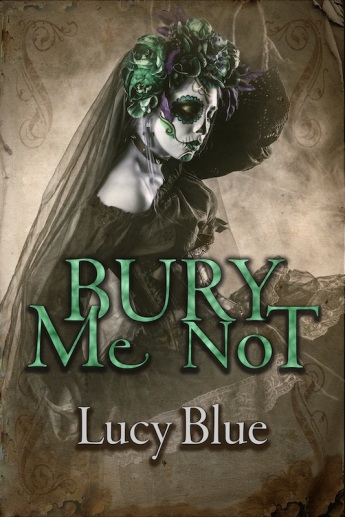 Hey Kittens – in case I haven’t mentioned it, there’s what I consider to be a really sweet Christmas story in Bury Me Not called “Cowboys and Krampus.” Here’s a little sneak peek:

By suppertime, the snow was drifted halfway up the windows downstairs, and the hotel was full enough to bust. People had drifted in all afternoon like ghosts in thick coats dusted white—trappers, gamblers, a traveling preacher, even a couple of farm families with kids. Just as Mrs. Bhaer and her daughters were setting the table, the big doors opened again, and two men came inside, one carrying a fiddle case. “Hooray!” the oldest daughter hollered, clapping her hands. “Now we can have dancing!”

They put me next to Cade at the table for supper, of course, and by the time we tucked in to Clara’s special brandy pudding, we were managing to be civil. But when the fiddler and his friend the piano player tuned up, we got as far away from one another in the big main room as we could get.

After a while Thomas came over to where I was loitering by the hearth. “Hey Daisy,” he said, offering me his hand. “Care to take a turn?”

“Are you sure that’s wise?” Cade had parted a fellow’s hair with the butt of his rifle in Kansas City for less.

I looked over at Cade, who was back to playing cards with one of the farmers, the preacher, and a professional gambler who would probably fleece the lot of them. “Yeah, I’m his fake wife now,” I said. “He probably won’t even notice.”

Thomas laughed. “Oh, I wouldn’t go that far. What’s got you in such a fidget, anyhow? Don’t you like Christmas?”

“Not especially.” Luis and Clara were having a sweet little smooch under the mistletoe. Our Mexican bandito was wearing a clean white shirt and had wet his hair and slicked it down flat until he looked like a bank clerk.

“Don’t be like that. These kids get a real hoot out of Saint Nicholas. I’ve been carrying a toy train for that bad little Klaus in my saddlebag since May just to see the look on his face.”

“That’s real sweet of you, Thomas.” Klaus and one of the farm kids were hiding under a table near Cade and his cronies, plotting mischief. I hoped they gave them all a hot foot. “But Saint Nicholas can kiss my ass.”

“From the mouth of a lady,” Thomas said. “What did poor ol’ Saint Nick do to cross you, Daisy?”

“Nothing, since he ain’t real,” I said. He just kept looking at me, waiting. “It’s a pitiful story.” Still waiting, one eyebrow raised. “When I was nine years old, there was a dolly in the window of the general store,” I said, turning my back on the room to face the fire. “She was the prettiest thing I ever saw, in a white dress, a bride. She had blue eyes and yellow curls like me, and I stood at the window for a while every day for a month just staring at her, wishing she was mine. My daddy got wind of it, and he told me not to worry, that if I was good, he was just positive Saint Nicholas would bring her to me for a Christmas present.”

“Oh hell is right,” I said. “I wanted that dolly so bad, I forgot my daddy was the town drunk and wouldn’t know the truth if he met it in the road. Three days before Christmas, that dolly disappeared from the store window, and I was just sure he had gotten her for me. He kissed me good night on Christmas Eve, and I just knew when I woke up, I would have my doll. I even had a name for her all picked out. I was going to call her Charlotte Russe after a sign I had seen in an eating house.

Thomas was standing beside me, blocking my view of the room. “I’m just guessing it didn’t work out that way.”

“Not quite, no.” I was glad he was hiding me from the others. I had tears in my eyes for a dolly I hadn’t seen for twenty years and had never owned; I felt like God’s own fool. “When I woke up, there wasn’t no doll nor no daddy either. I had to go down to the saloon and scrape him up to keep the sheriff from throwing him in jail for drunk and disorderly. Then as we were walking back, him leaning on my shoulder singing, ‘Hark! The Herald Angels Sing’ like some damned idiot, I saw this wagon full of folks riding past us on their way to church. They had a girl about my age; I knew her from school.” I wiped the foolish tears away. “She was sitting up front with her daddy, and my Charlotte Russe was sitting on her lap.”

“Damn,” Thomas said, glancing back at something over my shoulder. “That might be the saddest tale I ever heard.”

Before he finished saying it, I looked back and saw Cade right behind me. Before I could say a word, he had picked me up and slung me over his shoulder.

“What do you think you’re doing, you crazy bastard?” I said, kicking and beating on his back as he carried me to the stairs. “Put me down!”

“Nope.” Everybody in the room looked shocked, but nobody made a move to help me. Luis was grinning like a possum.

One thought on “An Outlaw Meaner than Krampus”