The third Stella Hart mystery is available now for pre-order from Falstaff Crush. This is the one that takes place in Hollywood in the 1920s, and it’s an absolute scream. You’ll love it, I promise. Click the cover to … oh. You want a sample before you’re ready to commit. Fine then. Have a look at Chapter 1.

Stella was chained to the castle wall with shackles that were becoming damned uncomfortable. “Do your worst, Lord Blackguard!” she exclaimed with much tossing of her waist-length locks. “I shall never submit!”

“We shall see about that, my dear!” Blackguard snarled, bracing an arm over her head. He leered down at her, his hot breath smelling suspiciously like gin and tonic. “Is your virtue worth your father’s life?”

“You heartless fiend.” If her hands had been free, she would have slapped a delicate wrist to her forehead. As it was, she made do with flopping her head sharply to one side, trying not to dislodge her wig in the process. She closed her eyes and heaved her bosom, such as it was. “How can you be so cruel?”

“Easy,” Blackguard said, leaning too close for the camera to see his lips. “Your friend Sylvia wrote me this way.”

“Eddie, I swear to heaven,” she hissed through clenched teeth as she bit her lower lip in maidenly revulsion. He had made her laugh and ruin three takes already, the swine.

“Unhand that damsel, you cur,” a props assistant droned from off camera. Blackguard, also known as Edgar Worth, Hollywood’s most celebrated heavy, recoiled toward the camera, and Stella broke out in her most elated smile.

Lance Laramie swung in on a rope tied to a crane, a stunt he had perfected on his and Stella’s first picture together, The Ape Man Unleashed. But this time, alas, he missed his mark. Instead of landing lightly between Stella and her villainous attacker, he overshot and crashed face first into the wall.

“Darling!” Edgar cried, dropping character to run to his lover’s aid. “Oh, your poor nose!” Everyone on Maid of Avalon knew Lance and Edgar had been much more than roommates for years, though the rest of the world was in the dark.

“Now, Eddie, don’t make a fuss,” Lance honked as his hand filled up with blood.

“Cut!” the director shouted, incensed. “For God’s sake, get some ice!”

“Oh, I’ve had worse, I dare say,” Lance said gamely. “Not to worry…” His eyes rolled back in his head as he collapsed.

“Somebody get the nurse!” the production assistant called as the director flung down his bullhorn, followed by his hat.

“I’m sure he’ll be fine,” Stella said to Edgar, who looked on the point of hysterics.

“It is,” she had to admit. She would have liked to have given him a comforting pat or something, but she was still chained to the wall.

“Clear the way, please,” a medic said. The nurse led Edgar gently away as Lance was heaved onto a stretcher.

“Say, Eddie,” Stella called as they all walked away. “Do you have the key to these shackles?” But no one seemed to hear.

“That’s a wrap for today, everyone,” the assistant director called through his boss’s dented bullhorn. “See you all tonight at Mr. Scott’s party—sober, if you don’t mind; it’s for charity.” Lights were going off all over the set.

“Excuse me!” Stella shouted as people started disappearing from the stage like rats deserting a sinking ship. “Isn’t anybody going to turn me loose?” She gave her shackles a healthy tug, but the props department had outdone themselves. They didn’t budge. “Oh come on,” she cried as all the lights but a single spot went out. “This is ridiculous!”

A man’s silhouette stepped into the spotlight. “Pardon me, miss,” a familiar voice said. “Are you in distress?”

“George, thank heavens,” she said, laughing with relief. “They’ve all gone off and left me.”

“So it seems.” Her fiancé, George Barrington, thirteenth Baronet of Kingsley-on-Pike and the future Lord Barrington, came out of the light. “That’s rather a pickle you’re in, Miss Hart, if you’ll pardon my mentioning it.”

“My handsome hero,” she said. And he was, too; he looked very dashing and just a bit disreputable in a stylish leather coat. “Go quick and find out who has the key.”

“Oh, I have the key,” he said, holding it up with mischief dancing in his eyes. “But what makes you think I’m the hero?”

“Oh dear,” she said. “The villain, then?” She felt a lovely little flutter in her stomach. “Will you ravish me before you set me free?”

He leaned closer, bracing a hand on the wall the same way Edgar had. “What an intriguing suggestion.” His lips were so close to hers, they were almost kissing already. “I suppose I could.”

“Well, maybe not scream,” she said as he nuzzled behind her ear, making her shiver. “More like sigh…and maybe the odd moan or two.” He made a bit of a moan himself as he kissed her, pressing her to the wall.

“Miss Stella!” her maid, Sophie, bellowed, her heels clicking on the concrete floor. “Are you still in here?”

“Damn the woman,” George grumbled, banging his forehead against the wall over her shoulder.

“Hey, what’s this?” Sophie said, coming into the light. “Mr. Barrington, I’m surprised at you!”

“If it helps, I’m thinking of dead puppies,” Stella murmured in his ear.

“Thanks for that, sausage,” he muttered, stepping away. “Sorry to disappoint you, Sophie.” He unlocked the shackles.

“Oh, I’m not disappointed,” Sophie said. “Just surprised. You ought to leave her chained up there until she promises to stop postponing the wedding.”

“It’s not my fault!” Stella protested. “No one expected The Ape Man Unleashed to be such a smash.”

“No one who hadn’t seen you and Mr. Laramie in those rags they called costumes, anyway,” Sophie said.

“And Bertie said we really needed to strike while the iron was hot,” Stella finished.

“Him, too.” Nathan Stanley was her stepfather’s partner at Pinnacle Pictures. He was also the one man on the planet she had ever seen George openly dislike. “The point is, Maid of Avalon was already in the pipeline, and Lance and I were under contract. I really had no choice.” They both looked skeptical. “Anyway, we’re almost done. We should be one more week at the most. Just as soon as we wrap, we’ll be on the train to New York and on a boat to England in plenty of time to be home at Barrington Hall for the new wedding date.”

“And our visit to your grandmother in Newport?” George said, arching an eyebrow.

“We may just have to give Granny Hart a miss,” she said.

“Say, are you folks almost done?” one of the stage technicians called from the shadows. “I’d like to lock up sometime before midnight.”

“All right, keep your shirt on,” Sophie called back. “We’re coming.”

With Sophie’s help, getting out of her costume and into her jodhpurs was the work of moments. “Call ahead and tell Bertie we’re on our way,” she told Sophie as she tossed a scarf around her neck. “I’ll see you at the house.”

“See you later, kid,” Stella called back over her shoulder.

George was waiting outside the stage on his shiny new red Indian motorcycle. “It’s a bit chilly, sausage,” he said, handing her a pair of goggles. “Would you like my coat?”

“No, thank you.” She slid the goggles over her curls and climbed on behind him, snuggling close. “I’ll be fine.”

And that’s it, kittens! To find out what happens next, get your copy starting July 29! 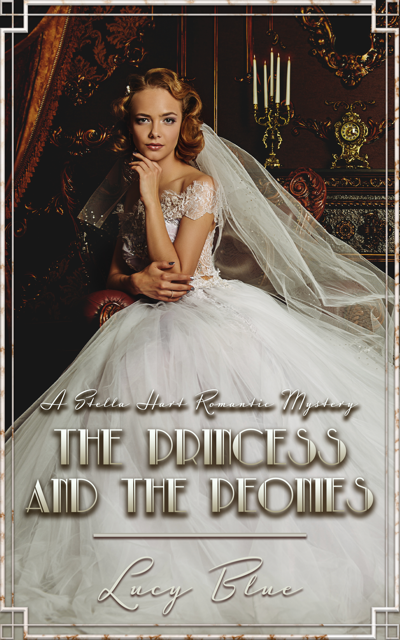